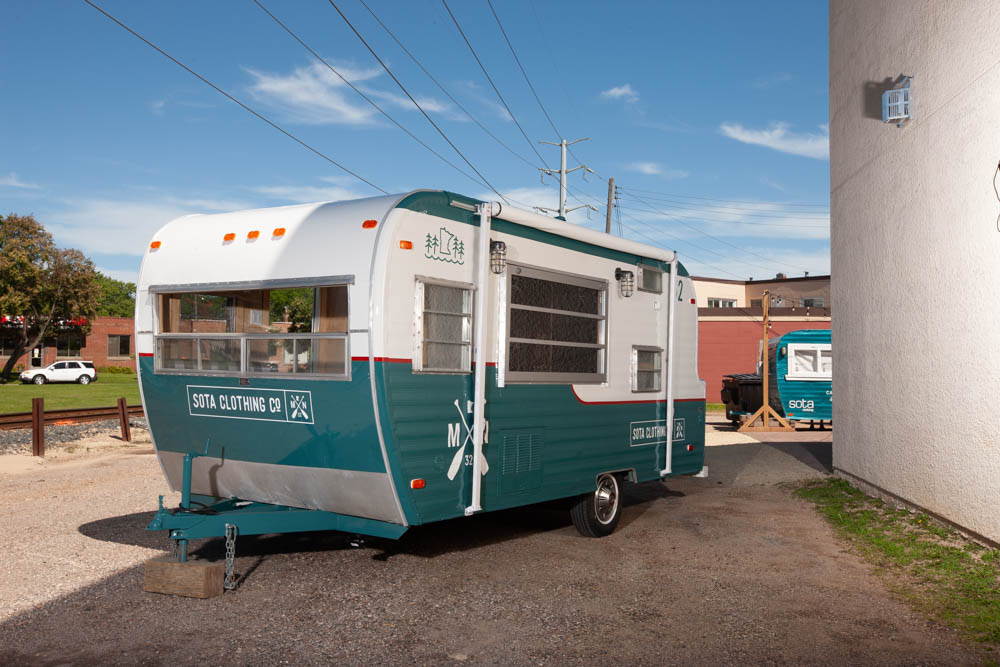 After three years of attending the Minnesota State Fair in their iconic 1972 teal Chickadee camper, Sota Clothing of St. Louis Park Minnesota, was ready to increase their square footage and tweak the layout of their mobile marketing trailer. Since many fairgoers sought out their iconic camper as they strolled through the Fair’s Northwoods area, Sota Clothing decided the new store should keep a camping aesthetic, inspired by Minnesota’s Northwoods as well as the state’s Nordic roots.

Several years prior, BIG INK’s Mobile Marketing team revamped a 1964 Airstream Safari Trailer into a mobile retail space for a store called Trailer Trash. Sota contacted the Eagan based company about the possibility of renovating their new unit – a 1967 Fan Camper, which offered 6 additional feet of retail space.

“We were excited to take what we had learned using the prior trailer,” says Spencer Johnson, Sota Clothing owner. “After a few years of pop-ups we knew we wanted more space as well as design tweaks to create a better experience, for both customers and staff.”

BIG INK’s Mobile Marketing team jumped at the chance to work on another trailer. They provided design, project management, branding, as well as interior and exterior layouts. The finished trailer represents a cohesive, branded mobile store. Details include shelving that was designed specifically to hold Sota’s product bins, charging stations and a built in Yeti cooler for team members. The service counter provides storage specific to Sota’s shopping bags and multiple cash drawers. Johnson’s mother even got involved by recovering the original dinette in black and red buffalo check. The chosen interior lighting compliments the minimalist pine and black décor. The exterior features the same teal color as the previous camper and custom LED lighting.

“It was another fun project, that turned out beautifully. We think people will really be drawn to the design and appreciate the streamlined shopping,” notes BIG INK president Tom Trutna.

Sota Clothing’s trailer will be in the Northwoods section of the Minnesota State Fair August 22 – September 2, 2019.